My last review of Linux Mint was for the Cinnamon edition of Linux Mint 13 "Maya". Linux Mint 14 "Nadia" was released back on Nov. 20, 2112, but with all of the hustle and bustle of the winter holidays, I didn't have time to install it and write up a review until now.

For this review I'm using both the 64 bit and 32 bit versions of Linux Mint 14 with the MATE desktop. The 64 bit version was installed inside a VirtualBox virtual machine on my desktop computer. The 32 bit version was installed on my MSI Wind U100 netbook. I started off by downloading the 64 bit Live DVD version of Linux Mint 14.1 over bittorrent. The torrent was running fast and my download completed in a little more than 30 minutes. This was most likely limited by my modest Internet connection.

My first look at Mint 14 was to install it into a VirtualBox virtual machine. Booting up to the Live DVD iso image was fast and in a few seconds I was viewing the desktop. The desktop felt snappy working with 1024 MB of RAM. After a quick test drive I decided to go ahead with an installation to the virtual hard drive. I chose the basic install option allowing Mint 14 to take up the entire 8 GB virtual disk that I'd created. Due to being based on Ubuntu, the installation is similar and familiar if you've installed Ubuntu previously. After selecting the language, keyboard layout, and timezone, the installation prompts you to create a new user ID and then moves forward with installing packages. After about 15 or 20 minutes I was prompted to restart the machine. I shutdown the VM and removed the virtual DVD from the drive and booted up to the fresh installation.

If you've used Linux Mint previously, you're probably familiar with the Mint Welcome Screen. This is where I ran into my first hiccup. Normally I've just dismissed the Welcome Screen and gone about my business. This time I decided to click on some of the links on the Welcome Screen to see what's new in this release. Clicking the "New features" link brought up Firefox, but then the "Close" button on the welcome screen didn't work. I had to kill Firefox in order for the Welcome Screen to go away. 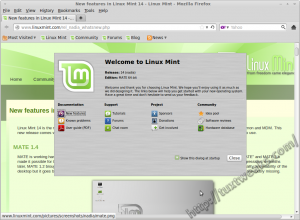 After getting through the Welcome Screen issues I moved on the check out the rest of the release. Since it's been a few weeks since the latest ISO was released, I was not surprised to see a notification that there were 116 updates available. I clicked the icon and entered my password to begin the update process. After a few minutes of downloading updated package information I got a number of error messages warning me that the Medibuntu repositories could not be reached. As that is a repository outside of the Mint team's control, I can't blame them for the issue. I clicked through the error messages and then found that the mintupdate package had to get updated first. After that updated, I then found that there were 184 updates for me to install. At this point all of the updates installed smoothly.

After a fresh boot, Mint 14 MATE was using only about 245 MB of RAM according to the System Monitor. Running Firefox with 3 tabs open and with an empty document open for editing, System Monitor showed about 360 MB of memory in use. This leads me to believe that Mint 14 MATE Edition would be suitable for systems with only 512 MB of RAM which is in line with the stated requirements.

After taking Linux Mint 14 for a test drive on VirtualBox, I decided to give it a try on my MSI Wind netbook. For that I downloaded the 32 bit edition. Again, the download was fairly quick over bittorrent. I decided that I didn't want to blow away my installation of Linux Mint 13, so I decided to resize the existing Linux partition to make room for a small testing partition. I tried to do this ahead of time from the Live environment, but for some reason GParted was indicating an error on the ext3 partition and was unable to resize it.  I went ahead with the install and decided to try partitioning again. The partitioning tool inside the installer had no problem resizing the existing ext3 partition and creating a new ext4 partition for my new install. Resizing and creating the new partition took about 20 minutes.

Once the partitioning was complete I went ahead with the installation. Similar to the Ubuntu installer, the Linux Mint installer offers to import settings from any other operating systems that it detects on the computer. The installer starts copying and installing files to the hard drive right away while you set your location, keyboard layout, and set up the initial user ID. The installation process took a little over 15 minutes to complete. The system prompts you to reboot once the installation completes.

On the first boot, I was again greeted with the Mint Welcome Screen. I found that I had the same issues with the Welcome Screen on my netbook as I did with my 64 bit installation on VirtualBox.

The screen resolution was properly detected and set to the maximum amount. Screen brightness and audio were both set to a medium level. The touchpad worked properly registering taps as clicks and corner taps worked to scroll windows. The special function keys all worked to adjust sound volume and screen brightness. The wifi card worked properly and the system even remembered the wifi password for my router that I entered from the live environment prior to installation.

Shortly after logging in, an icon showed up in the system tray indicating that there were 116 recommended updates available. Clicking the icon prompts for the user password and then starts the Update Manager. Like before, the system first needed to update the mintupdate package. After applying that update, the Update Manager said there were 208 recommended updates available.

Clicking on the menu button brings up the Mint Menu in its Favorites mode. This mode of the menu shows items that the developers have deemed to be the most popular or useful items for users. Clicking All Applications in the upper right corner changes to a more traditional cascading style menu. One feature of the menu that I really like is the search box at the bottom. Entering a term into the search box will find any locally installed programs that match the search. If there aren't any matching programs, the search results offer several options to search further. If your search matches any installable packages, those are presented for installation right there in the menu. Clicking one of the package installation buttons will bring up the Synaptic Package Manager to complete the installation. 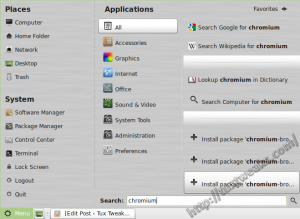 Mozilla Firefox and Thunderbird come installed for web browsing and email respectively while Transmission is included for downloading over bittorrent. The Libre Office suite is installed for your office document needs while Banshee is provided for managing and listening to your music collection.

Codecs to play popular free and non-free media formats are included by default, so no extra steps need to be taken by the user to play MP3 music files of Flash videos. Applications for viewing PDF's, viewing and editing photos, editing text files are included along with the other basic functions you would expect.

The Totem movie player is provided along with Gnome MPlayer and VLC for viewing video files and Brasero is included for authoring and burning CD and DVD discs.

Eye of MATE and gThumb are both installed for viewing and organizing your digital photos while the GIMP Image Editor is installed for heavier duty image manipulation.

There are also several programs installed for setting preferences and managing your computer. For file management, Mint 14 comes with Caja 1.4.0. I was pleased to see that this version of the file manager includes an icon to toggle the path display between a button/breadcrumb style and a basic text style. This is a feature I'd been missing since it was removed at some point from the GNOME file manager, Nautilus. 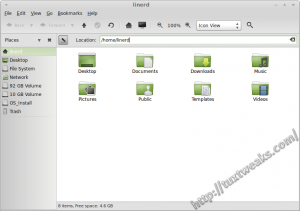 Linux Mint 14 has a few different systems for managing software packages. The first one that you see on the menu is the Software Manager. The Software Manager allows you to browse through categories of software or search for a particular program. It works similarly to the Ubuntu Software Center. Packages are installed in the background meaning that after you select a package for installation, the Software Manager starts to download and install the package while you're allowed to continue browsing for more programs if you want.

Just below Software Manager on the menu is Package Manager. This menu entry launches the Synaptic Package Manager that most users of Debian based distros will be familiar with.

For those who prefer to manage software packages from the command line, the standard tools of apt-get, aptitude, and dpkg are all available.

In my review of Linux Mint 13 "Maya" I had noted that while the system appeared to resume properly from suspend to RAM or hibernate, my wifi connection would not work without a reboot. I'm happy to report that the issue has been resolved in Linux Mint 14. Everything is working properly for me after resuming the system.

Linux Mint 14 "Nadia", MATE Edition is another solid release from the Linux Mint team. It's fast and responsive, even on my netbook, but it still includes most of the latest and full functionality software one would expect from a modern Linux distribution. I would not hesitate to recommend it to someone whether they are new to Linux or a seasoned Linux vet.