I run a media server at home to feed music and movies to my LG smart TV (affiliate link). Ripping the family's DVD collection is one of my tasks as the resident computer geek. Normally, Handbrake is my go-to tool for this type of thing, but in this case it was unable to detect the correct title from the DVD structure. In this tutorial I'll show how to rip a DVD on Linux with Mplayer.

Not only did Handbrake have trouble, but DragonPlayer couldn't play the DVD and VLC crashed every time I tried to use it. I finally had my first glimmer of success with the Xine media player. With Xine I was able to open the DVD menu and launch the main feature. Using the navigation controls I clicked on the angle button and Xine momentarily showed the title number on the status line. In this case it showed that the main title was number 31 on the DVD.

Checking the DVD in Handbrake again showed that title 31 was not among the available selections. So at this point I needed a way to first rip the desired title from the disk. 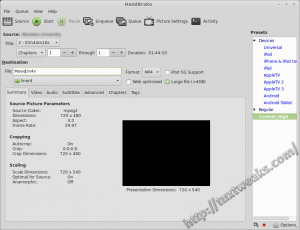 Mplayer to the rescue

Once I knew that title 31 was the main movie on the DVD, I was able to play it in Mplayer with:

Rip the DVD With Mplayer

Now to rip the DVD. Mplayer is able to do this task for you if it can play the DVD. The following command will rip title 31 to an uncompressed MPEG file.

In this case I used the -noidx switch because I got a broken index on my MPEG rip without it. This completely removes the index from the file. Handbrake won't know how much time is left in the encoding process, but it will create a good MP4 when it's all said and done. You may not need this switch in your case.

Now that you have an MPEG rip of the movie, you can re-encode it to a nice MP4 file with Handbrake. 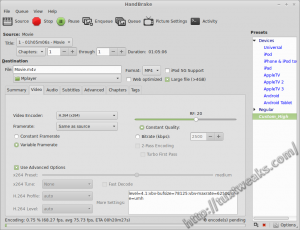 In this particular case, the uncompressed MPEG was 5.9 GB in size. After re-encoding with Handbrake it was 1.3 GB.

So there you have it. When Handbrake doesn't work on its own you can use Mplayer to rip the video first and then re-encode that file to MP4 with Handbrake or the tool of your preference.

Previous: How To Install screenFetch in Linux
Next: How To Create a Linux Mint Persistent Live USB